Message From A Mistress by: Niobia Bryant 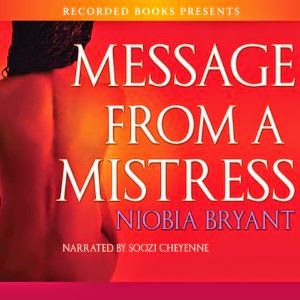 Message from a Mistress

I believe this novel by Author Niobia Bryant, was her debut novel, and she knocked it out the ball park with this work, which was cleverly written.

My version of this novel was an audiobook purchased from Audible.com. It was narrated by (the seductive voice of), Scoozi Cheyenne. It plays 8 hours and 44 minutes, which is about the average time 8 to 10 hours, and it's Publisher: Recorded Books.

I loved the way Author Niobia weaved this tale because the mistress within this story took a back seat to her three friends Jaime, Renee and Aria who all had some deep dark secrets which was unknown to each other but the mistress who had highjacked one of their husband's.

The character development was excellent. The plot was driven by curiosity because you wanna know who's husband wasn't coming home, while the subplots revealed the reasons of how a backstabbing bitch was afforded the opportunity to place them in their situation.

What situation, you asked? Well, these three women, Jaime, Renee and Aria all received a text message from their friend, Jessa while having a spa day. The message told them that she had been sleeping with one of their husbands, and that they were in love, they brought a house together, and that him and her was running off to live happily ever after. That's the situation I'm talking about.

These women sum up their lives in the few agonizing hours afforded to them before they learn which of their husband's will not be returning from their fishing trip. -And you know what the mind can do to you when haven't been living right. You know what I'm talking about. That little affair you had, that walk on the wild side, lying on your ovaries, and little stuff like that can really weight on ones emotions, and it does.

The writing is clever, the characters are real, the situation happens more often than not. I gave this novel 4 stars out of 5. It will surly entertain you, and make you wonder about how you living.


Posted by Author Lord'Williams at 2:53 AM No comments:

Promote Your Page Too